Tales from a pilgrims’ hostel

An 85-year old Dutch guy arrived here at the pilgrims’ hostel in Najera, northwestern Spain, pulling a 100-kilogram cart. While all the other arriving pilgrims were walking toward Santiago, Johannes van der Pas was going the other direction back home.

Johannes celebrated his 100th day on the Camino and has become quite a celebrity. Passing motorists have been seen waving to him. Strangers are inviting him to stay overnight after he was featured on Portuguese television while on his way to the famous pilgrimage town of Fatima.

He started walking from Eindhoven, Netherlands, then stopped in Lourdes and from there walked via Santiago to Fatima. 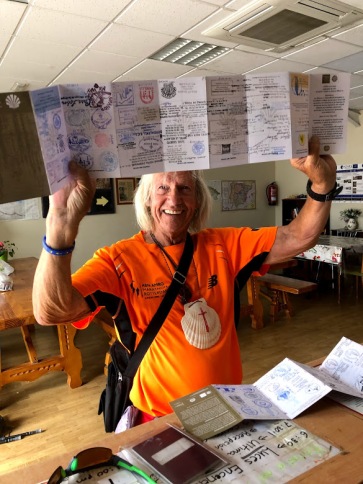 Johannes van der Pas with his credential or pilgrim’s pass displaying all the stamps from the towns he has visited along the way.

It’s a remarkable achievement for any person, but this guy is not letting the old man in and is in better physical shape than most men half his age. He has according to my calculation, so far walked 3,340 kilometers, averaging 33.4 kilometers a day.

On occasions, he has walked all night in the rain in the remote areas of France where, in contrast to Spain, there are hardly any pilgrims hostels.

Johannes is living proof that it’s possible to remain mentally and physically active up to a high age. His recipe is simply doing a good walk every day, and shakes his head at the many people starting their walk on the Camino with little training and then complaining about sore knees and feet.

It’s my fourth day serving as a voluntary hospitalero in this town. The hostel is run by the local municipality and pilgrims are just asked to provide a donation to offset electricity and water costs. Locals living along the Camino have for centuries been generous hosts to pilgrims walking to Santiago de Compostela. The marker stones with yellow arrows on the path are almost entirely put up by local volunteers, paying for them with their own money. It is therefore sad to see that some of these markers are defaced by “Killroy was bere”  ego-minded “bypassing tourists.”

We voluntary hospitaleros are being greeted here with exceptional kindness. Restaurants have refused taking money for meals. Entry to the local museum and monastery is free of charge.

On the third day, we registered 58 pilgrims including seven from South Korea, one from Taiwan, two from South Africa, two from Bulgaria, one from Hungary, one from Venezuela, three from Japan and six from the United States and Canada. Most people are from Spain, Italy, and France as this is the main vacation period in these countries.

And, just as I’m finishing the Blog for the day two women from Greenland arrive at the door, saying that they will stay for the night as they are not used to the warm temperatures.
Reino Gevers – Author, Mentor, and Consultant