Reconnecting by walking the Camino 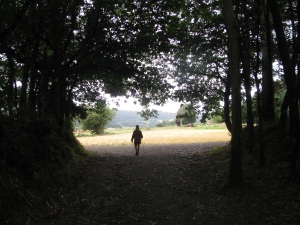 Tomorrow my wife Alyce and I are starting our walk on the Camino from the French town of Lourdes.  Its time to walk things off again and to reconnect on many levels after a more than challenging year. For centuries, if not longer, countless people have walked these ancient paths mainly as an inner and outer spiritual journey. It is believed that prior to it becoming the mainly Christian St. James Way the Celtic people had walked these ceremonial paths in paying homage to the Earth Goddess.

Over the years I’ve walked several Camino routes alone, with a good friend, in a group and with my wife. I’ve been asked so why walk the Camino if you can go on a hike anywhere else? Whats the big deal? Why are so many thousands of people in modern times rediscovering this ancient pilgrimage route and taking time out to “walk things off”.

I’ve had some of the most interesting meetings with people from all walks of life on the Way. Some take time out after having lost a loved one, or having recovered from a serious illness or finding themselves at a crossroads in life. Others simply enjoy the walking. But nobody I know has gone home from the Camino without it having triggered something something in their lives. Its been a long tradition to leave a stone at these kilometre markings as a sign of respect to previous pilgrims, or to let things go that you no longer need in your life, or in memory of a cherished person. 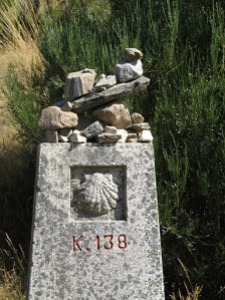 During the Middle Ages it was common for at least one member of a family to go on the pilgrimage to “cleanse” the family line of “sins”.  Many never came back. It was an arduous route in those times with many people dying of disease and illness. Today practically every town caters towards the pilgrims with good food and comfortable accommodation. The route is well-marked although every pilgrim will tell a story of having got “lost in the way.” It is part of the process of reconnecting, finding ones rhythm and getting back into ones own space.

This time we will be walking about 270 km over two weeks from Lourdes to Puenta La Reina, taking things as they come. We will keep you posted.